The Iberian pig is a unique species with genetic characteristics that differentiate it from other animals of the same species. They are predominant in the Iberian Peninsula, shared between Spain and Portugal, and are highly appreciated animals in the gastronomic sector as they are used to produce the famous Iberian ham and different types of Iberian cold cured meats.

One of the particularities that make it so special is the ability to infiltrate fat into the muscle, which is the main reason why Iberian ham has such an exquisite flavour and even gives the sensation of melting in the mouth.

The physical features of the Iberian pig

The Iberian pig is an animal of the porcine breed, the name also applies to the varieties belonging to what is known as the "Iberian trunk", which include black and red, hairless or hairless breeds.

Physically speaking, these animals have a well-proportioned head and a pointed snout, unlike other types of pigs, the Iberian has a powerful neck, a drooping dewlap, medium-sized ears in the shape of a visor and a wide belly. Its limbs, the ones we are most interested in when talking about ham, are slender and proportionate. 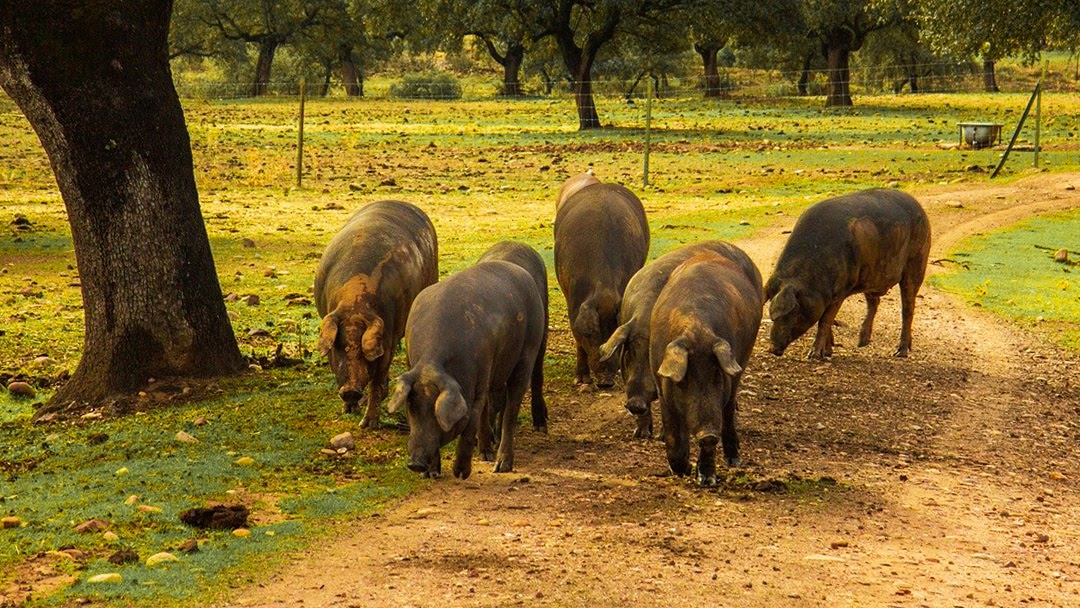 Iberian pigs, as the name suggests, belong to a breed native to the Iberian Peninsula located between Spain and Portugal, where there are two groupings of breeds which are discussed below:

The most widely used variety in the world of ham is the Retinta or Colorada which, as well as being very prolific, allows a higher yield of ham pieces.

What sets the Iberian pig apart from the rest

The most important thing you should know is that the Iberian pig is a native breed and that its physiological capacity to store fat between the muscles makes it of high gastronomic value. Iberian pigs are the only pigs in the world from which Iberian ham can be obtained, a product with a very particular aroma, flavour and texture, healthy and nutritious.

According to the legislation that regulates the production of Iberian ham, the denomination "Iberian pig" includes all those pigs whose mother is 100% Iberian and is registered in the herd book of the Iberian Pig Breed. The offspring of this pig, and therefore the products produced from them, can have different percentages of purity: 50%, 75% or 100%. See picture 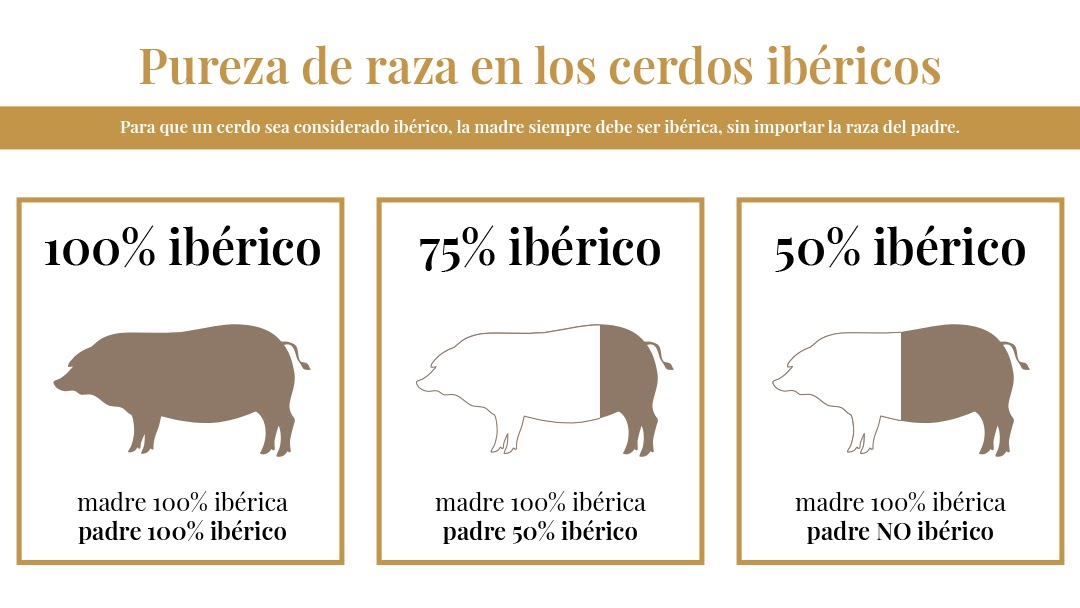 In the production of Iberian ham (Jamón ibérico) , it is not only the breed that is important (which is fundamental), but also the process of rearing the animal, which involves the place where it lives and its diet.

The places where the Iberian pigs live in freedom are called 'dehesas' and correspond to a few hectares of land where the conditions are favourable for the pigs to live in freedom during the autumn and winter months. The dehesas are located in Extremadura, Salamanca and Andalusia, where the acorn, the fruit on which the Iberian pigs feed and which gives rise to the famous 'jamón ibérico de bellota' (acorn-fed Iberian ham), is found. 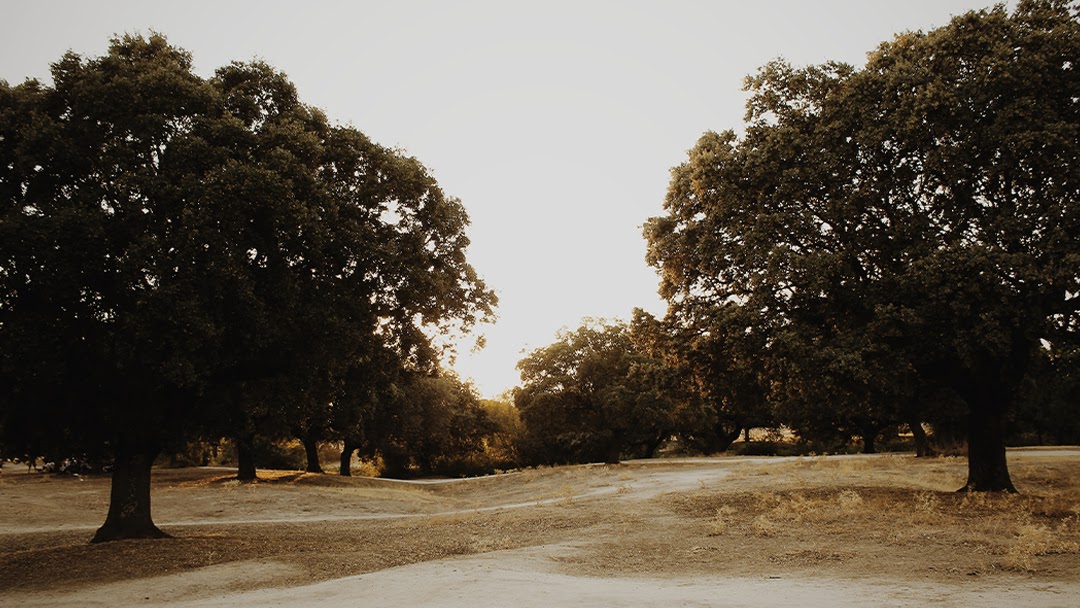 The Iberian pig (either 100% or 50% Iberian breed) "montanera", that is, it lives in freedom in the pasture during autumn and winter feeding on acorns. These are the ones that have an exquisite oil that the pig infiltrates into the muscle, turning it into highly prized fat. 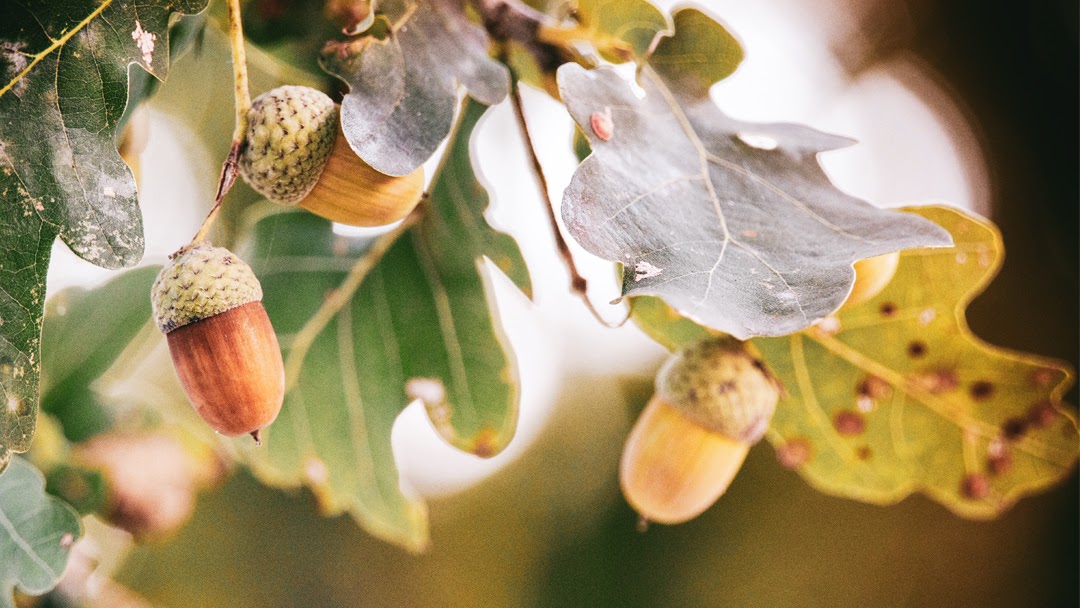 In short, the Iberian pig is an animal exclusive to the Iberian Peninsula that provides us with a star product such as Iberian ham. This product has become a worldwide claim in the world of gastronomy and a symbol of our country. 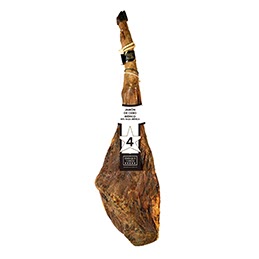 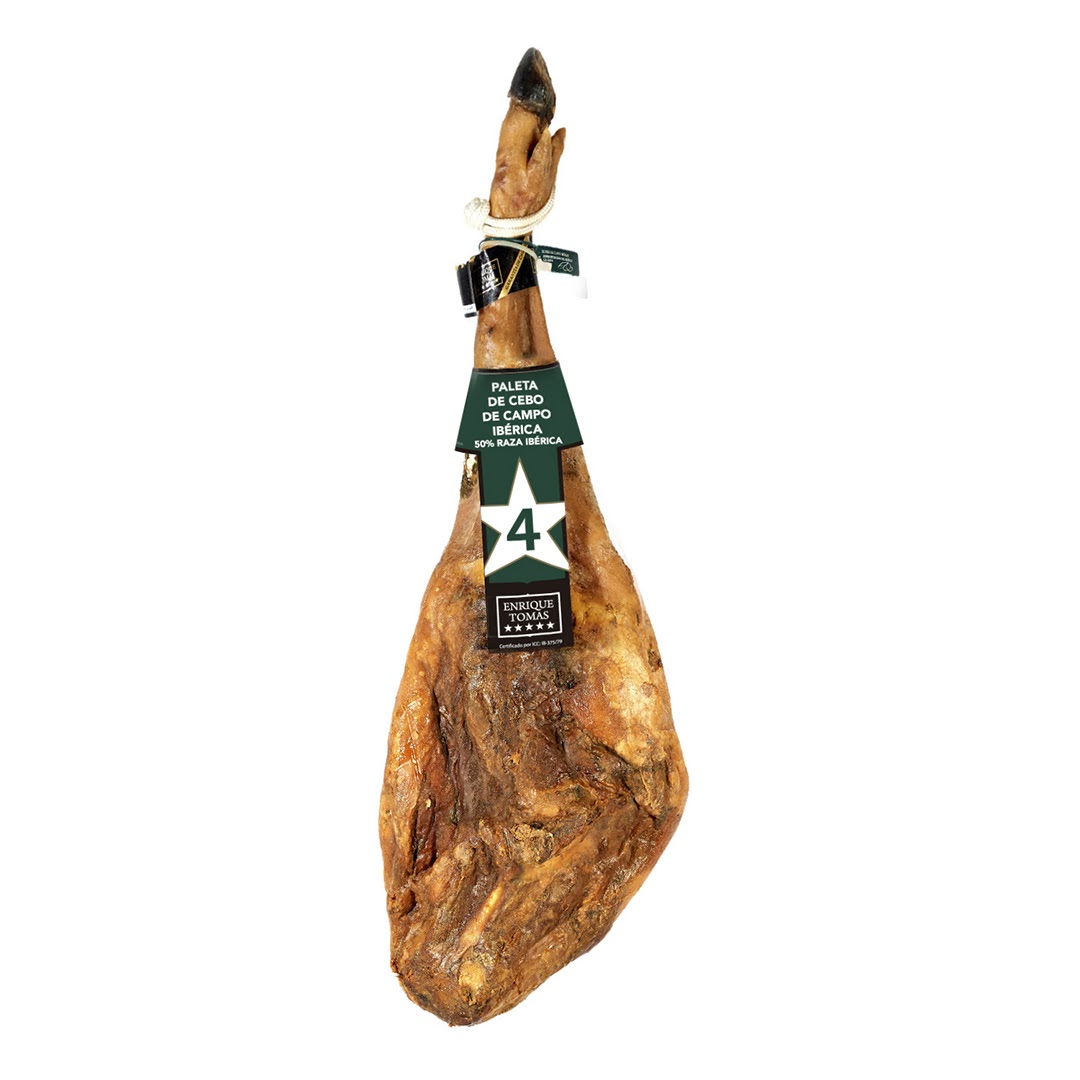 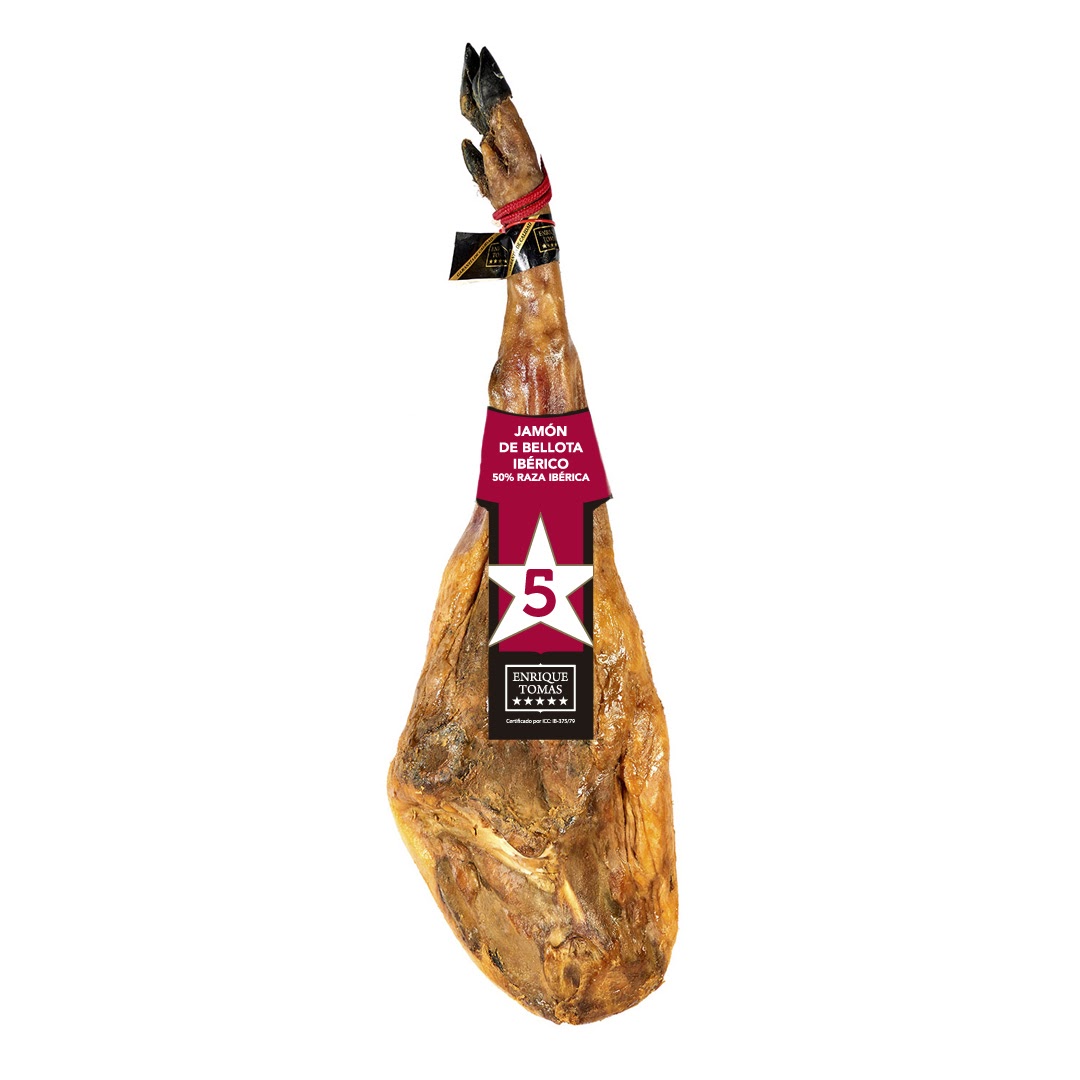 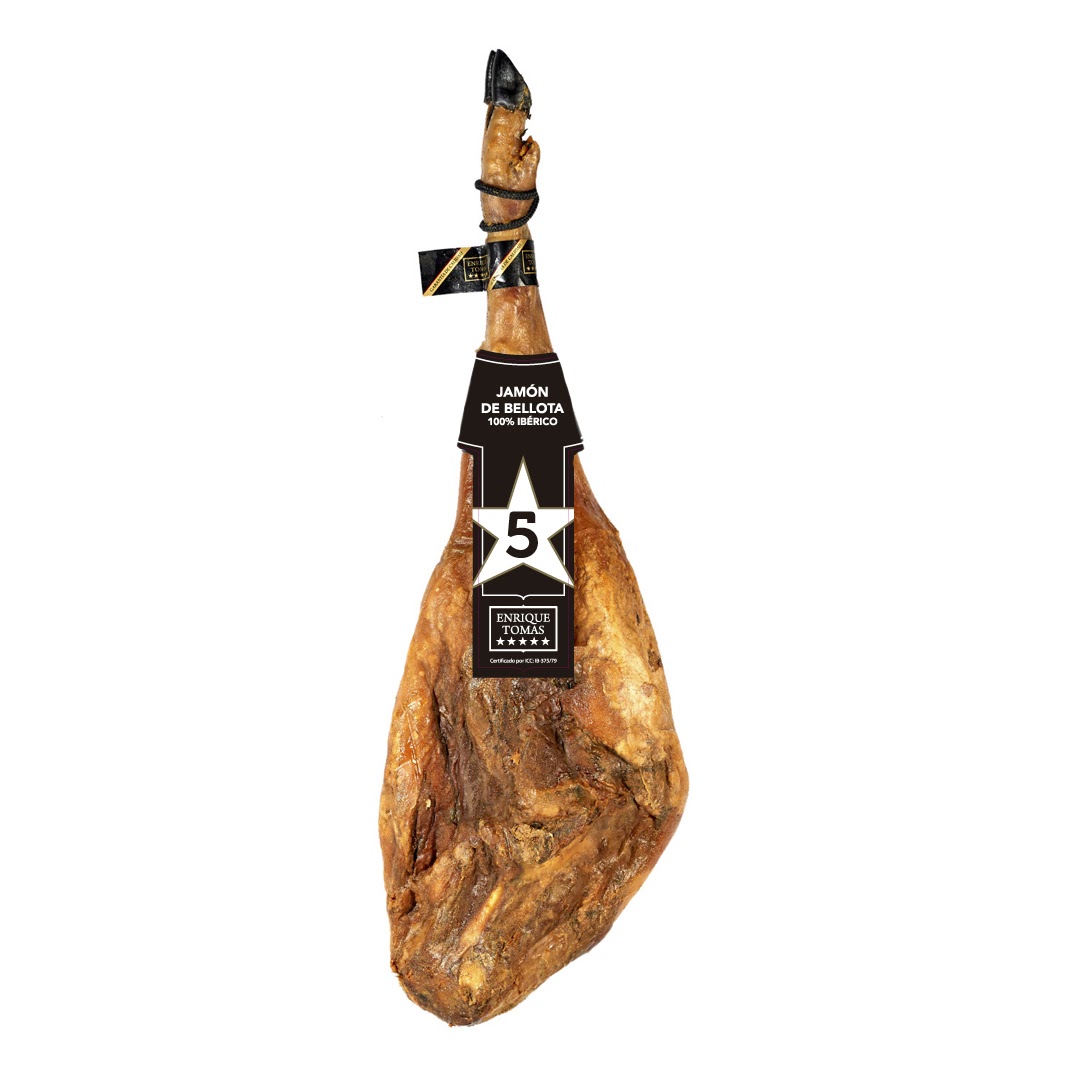 What is the difference between a white pig and an Iberian pig?

The Iberian pig corresponds to a species with genetic characteristics that differentiate it from other animals of the same species. They are predominant in the Iberian Peninsula, shared between Spain and Portugal, and are highly appreciated animals in the gastronomic sector as they are used to produce the famous Iberian ham. These pigs have the ability to infiltrate fat into the muscle and this makes them truly unique. The white pig, on the other hand, can be found all over the world and gives rise to another type of ham such as the one popularly known as Serrano ham.

Because there are places where there are ideal climatic conditions for this type of pig to live and develop all its capabilities.

What kind of hams come from the Iberian pig?

What type of ham comes from the white pig?

The ham that comes from the white pig is popularly known as Jamón Serrano in Spain.