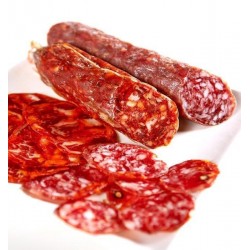 Your table never should never lack of Iberian products! Enjoy two fantastic products with this pack of Iberian cured meats that includes Chorizo and Salchichón de Vela. The mix reaches 480 grams and will be the perfect purchase if you want to enjoy the Spanish flavour in a snack at any time. On the one hand we have an Iberian chorizo made from the highest quality lean pork parts, selected exclusively for the production of this product, seasonings and spice led by paprika. On the other hand, the Iberian cured meat made from selected lean meats of the best Iberian pigs, wisely flavoured with natural peppercorns and with an unmistakable texture, which melts on the palate. Both cold meats have been made for your enjoyment following artisan methods under the strictest quality controls. Do not pass the chance of tasting them!

Within the range of the famous cured and cold meats of our gastronomy, chorizo undoubtedly occupies a very special place. To sum up, chorizo is made with the highest quality lean pork parts, seasonings and different spice, and just like lomo or jamón, chorizo needs time, although this case the dry curing period is much shorter.

The characteristic red colour of the chorizo is due to the paprika, an essential ingredient in the preparation of the coveted sausage. In fact, this characteristic is what makes the Spanish chorizo a standard and a unique product in the world's gastronomy, the taste and color make it different from other sausages and chorizos from other places.

In Enrique Tomás you will find a high-quality product with pieces and slices of Chorizo Ibérico Bellota, made with acorn-fed Iberian pork, which is used to make the exquisite Pata Negra hams. As well as Iberian Chorizo, a product obtained from pigs of the Iberian breed but whose diet has not included acorns.

For a pig to be considered"Iberian" it must have a minimum breed purity of 50%, in which case only the mother was a pure Iberian pig. In these cases, the crossing with white pigs, the Duroc breed is the most common. From there, we can find 75% Iberian pigs, where in addition to the mother 100% Iberian breed, the father is a pig resulting from a cross between a white and an Iberian pigs and finally, 100% Iberian pigs, producers of the famous Jamón Pata Negra.

The Spanish gastronomy is world famous and its cured meats, together with the Jamón Ibérico, are one of the protagonists of this popularity. Each region and town has its own products and, above all, the traditional preparation and local flavours are valued: chorizos, fuet, salchichón, chistorra and other wonders that many of us could not do without.

When we speak of cured meat we refer to a processing technique, therefore, what is known as cold meat is not a sausage, nor can our beloved jamón be considered as such. To make a good sausage you need meat from different parts of the pig (lean areas and fat) and seasonings that can vary according to each cook and/or product to be prepared. Once all the ingredients have been combined, the mixture is stuffed into a natural or artificial casing, as the case may be, and allowed to cure for as long as it needs to acquire its colour, flavour and texture.