In order to know the types of Jamón that we can find in the market and make a good buying decision, we must take into account some variables that become essential to find our ideal ham. Our aim is to turn you into a Jamónexpert so that you can know which ham is the most suitable for you.

The vocabulary used in the world of Jamón is quite complex and it is true that over time some beliefs have been generated around this product that are not entirely true. Let's start with the simplest, taking into account three basic variables to define the type of Jamón. These are the breed of pig it comes from, its diet and the curing time. 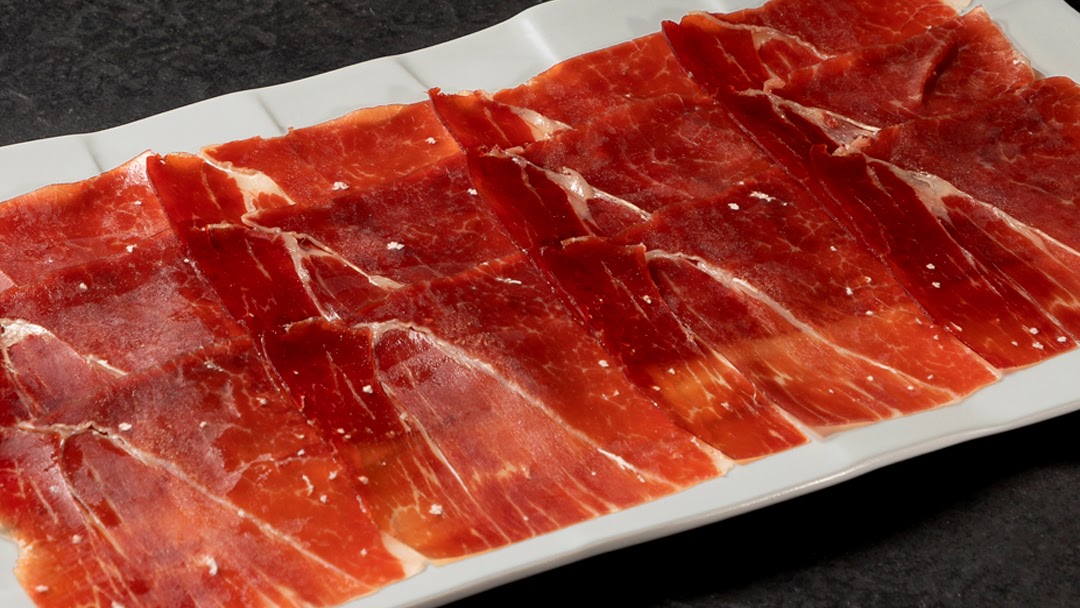 There are two main types of ham that interest us. On the one hand, Serrano ham, the most common, the one that can be found all over the world. And on the other hand, Iberian ham, a star product in world gastronomy, but only found on the Iberian Peninsula.

Serrano ham comes from white pigs. These are pigs that are raised on farms and fed on feed and cereals. The curing time in salt of Serrano ham legs is 8 to 12 months in most cases. At Enrique Tomás, our Serrano ham is the "Gran Reserva". It is a non-Iberian "all-rounder", its curing time is around 18 months, which allows the product to acquire a more authentic and exquisite flavour, as similar as possible to Iberian ham. We tell you more about Serrano ham in the following link.

Jamón ibérico comes from the Iberian pig, native and unique to the Iberian Peninsula. Depending on the percentage of Iberian breed that the pig has and the food it receives, there are different types of Iberian ham. To find out more about it, click here.

Jamón de cebo 50 % ibérico: This Jamón comes from the Iberian pig but, due to its genetics, weight, etc., the farmer decides to raise it on a farm. There it is fed with fodder and cereals. Then, in this case, at Enrique Tomás we cure it in salt for approximately 24 months.

Jamón de cebo de campo 50% ibérico: In this case, the Iberian pig has lived on a farm, but also in freedom, grazing in the countryside, being able to feed on some wild herbs and fruits and acquiring some qualities that will make it a better Jamón. Even so, it must be borne in mind that the basis of their diet is feed and cereals. In this type of pigs, the percentage of Iberian breed purity is usually between 50% and 75%. Its curing time is also around 24 months.

Jamón de bellota 50% ibérico: Iberian acorn-fed “Bellota” hams, on the other hand, come from pigs that have undergone the montanera, the name given to the last fattening phase of the pigs, which takes place from October to February in the dehesas. During the winter, the pigs are released into the wild, where they feed on acorns and roam freely. Thanks to the pigs' ability to infiltrate the fat into the muscle, to a diet based on acorns and natural products and to the activity of the animals during these almost five months, their front and hind legs acquire the characteristics that make their meat so juicy and delicious. In this type of ham, the percentage of purity of the Iberian breed is usually between 50% and 75%.

Jamón de bellota 100% ibérico: The one popularly known as "Pata Negra". This Jamón has done everything we have explained in the previous point, but it meets a very important and specific requirement: it is a pure-bred Iberian pig, that is, from a 100% Iberian father and mother. It is the only one that can be considered 100% Iberian and, for this reason, it is the most prized and the most expensive.

Find out more about Jamón/ham Bellota : 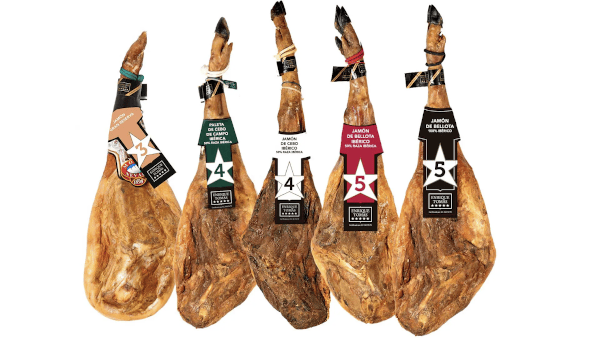 The flavours of Jamón

The types of Jamón can also be classified according to their place of origin, a variable that directly affects their flavour. Now you will understand why.

In the case of Jamón Serrano it is clear. Depending on the country it comes from, it has certain qualities or others, as well as a unique flavour. What in Spain is Jamón Serrano, in Italy is "Prosciutto" and in France "jambon", but, although they are apparently the same product, the differences are obvious and we can clearly see them on the palate.

Depending on the area of origin, or as they say, depending on its "denomination of origin", ham is usually treated in one way or another. This will be a key point in differentiating their flavour. As we say at Enrique Tomás, "the cooking process is everything". And what does this cooking consist of? It is the preservation of the leg in particular conditions and for a specific time so that it slowly gives rise to the delicacy that we eat.

Flavours of Iberian ham according to palates

As we say at Enrique Tomás: "there are different flavours to suit different tastes". We believe that it is not the most expensive ham or the one with the purest breed that is best, but the one you like the most. And we are going to help you find it. So, we have gone one step further, and we have classified the origin of the ham according to the flavour. For us there are 4 flavours: 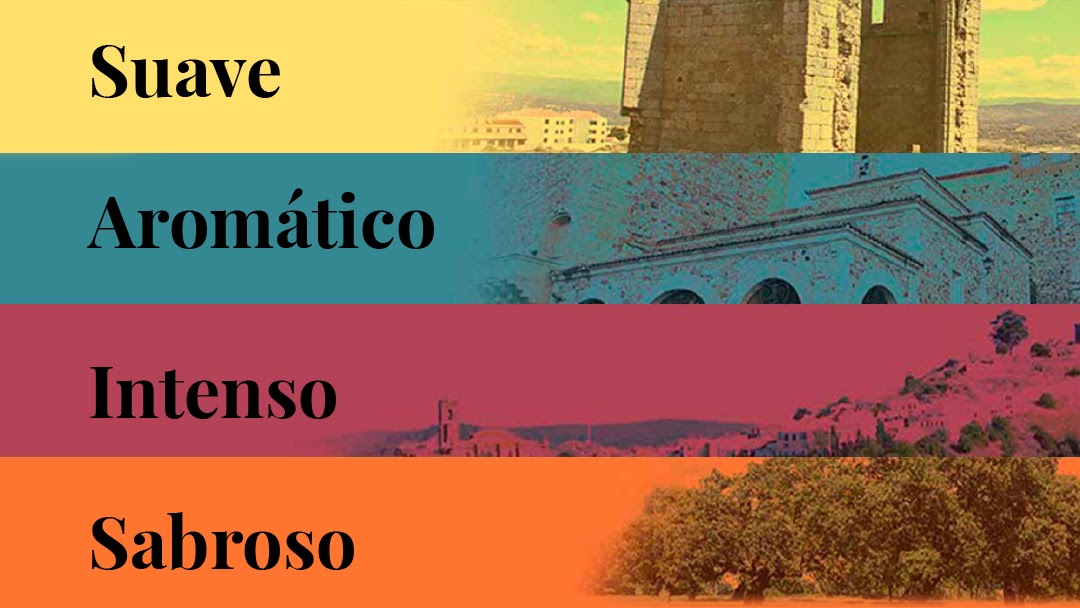 In short, the variables that affect the classification of Jamón into one category or another are the breed of pig, the pig's diet and its treatment or curing time. In addition, within each type of Jamón there are nuances of flavour that can be different depending on the place of origin and the producer. As the saying goes, "every master has his own way of doing things".

If you like to let yourself go, at Enrique Tomás, as expert ham makers, we will help you find the perfect Jamón for you. Contact us and we will give you the best advice possible.

How do you decide which Iberian pigs are going to do \" the montanera season\" and, therefore, provide a Jamón Bellota Iberico?

This depends on the season and above all on the weather, as happens with a grape harvest or a harvest. The foreman of each livestock farm will decide the number of Iberian pigs he is going to leave at liberty, depending on the amount of acorns that nature has provided that year.

Can Jamón Ibérico be made in other parts of the world?

No, Jamón can only be made on the Iberian Peninsula, its place of birth and origin.

How is Jamón Bellota 100% Iberico different from the rest?

It comes from a 100% Iberian mother and father and has been reared in the wild in the pasture feeding on acorns.

Which Jamón is better?

There is no one better than the other. We know that Jamón Bellota Iberico is the best quality. However, this does not mean that it is the one you are going to like the most, nor does it mean that it is the only good alternative when it comes to buying a Jamón. It will depend on your taste and what you want to use it for.

What is the main difference between Jamón Serrano and Jamón Ibérico?