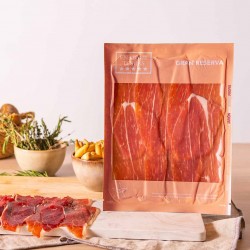 How is Serrano Ham made?

Serrano ham is everything that is produced with the hind legs of white pigs and, although its flavour is also delicious, it has nothing to do with that of Iberian ham, as the latter is more oily thanks to the ability of pigs on our peninsula to infiltrate fat into the muscle. Thus, how is Serrano ham made? Is the curing process

When we talk about curing in gastronomy we are talking about... very different from that of the Iberian? Enrique Tomás will answer all your questions in this regard!

In addition to coming from different breeds of pig, the most obvious difference between the Serrano and the Iberian Ham is their price. The curing process of the Serrano is considerably shorter and this, together with the fact that the quality of both is not the same (that of the Iberian’s is superior), reduces its cost.

Although the curing phases are the same, for the last one to be carried out in the right way, the Serrano needs considerably fewer months. As with Iberian pork

The pig is a wonderful animal that is part of the famous Med..., once the hind legs of the pigs have been cut, peeled and cleaned, the “cocinado” (- the cooking) begins, as Enrique Tomás likes to call it, and consists of: As we have already mentioned, Serrano ham and Iberian ham come from different breeds of pigs and the genetic peculiarities of the Iberian pigs

The Iberian pig is an animal of the porcine breed, the name ... is what makes their meat so special. However, breed, price and dry curing time are not the only things that distinguish them. The Montanera Season is a period in which pigs are free in t... -Season. During this period, their diet has been mainly based on acorns, wild herbs and everything they have found in the pasture while roaming and thus making physical exercise, results in a very juicy product.

As far as the Serrano is concerned, it should be borne in mind that although white pigs are released into the pasture to enjoy this quality of life, the ham produced with their hind legs can never be the same because, as we have already said, they do not have the capacity to infiltrate fat into the muscle. This is the reason why they are usually fed with feed.

So, how is Serrano ham made? Exactly in the same way as the Iberian ham, but the outcome, is it the same? Of course not!

Tipo de servicio
Sliced ham
Nombre del proveedor
ENRIQUE TOMÁS S.L. ,
C/ Occitania 45,Badalona,Barcelona-08911,
Telephone No.+34 93 383 84 85
Área
Sales Department
Descripción
How is Serrano Ham made? Well, the process is much easier to understand than it seems, so discover it with us!