How to cut a perfect slice of Jamón- Ham Contenidos ocultar
1 The necessary tools
1.1 A ham stand
1.1.1 Types: there are many but we will highlight the most common ones
1.2 Good quality knives
2 How to cut a perfect slice of Jamón
2.1 Does slice thickness matter?

The essence of eating a good Jamón/ham is not only that it is well cured and of good quality, but also the way that it is cut. Since Enrique Tomás, we have said it many times but we do not get tired of saying it, a good cut of a ham

Ham is one of the star products of the Spanish gastronomy, a... or ham shoulder is fundamental to achieve two main objectives: a good taste that gives pleasure to the palate and the maximum performance of the piece. Therefore, a bad cut would imply a great damage, due to the loss of nuances in flavour and texture and, above all, we would waste and ruin a gourmet product that has cost money and years of dedication and care from the hands of some craftsmen who are experts in its preparation. What a pity not to do it well, right? Everything leads us to a simple detail, if we cut a slice well and continue to do it well we will have achieved both objectives.

In the premises of Enrique Tomás when someone says the word... only, be it a ham shoulder or a ham, as there are areas where the ham knife no longer reaches and they have to be cut with the boning knife. This is where the delicious ham shavings Chip is a thin sheet obtained with wood or metalworking tool... and cubes come from, which are as delicious and tasty as appetizers and, above all, the ham shavings in sandwiches. Of course, as you have been able to deduce, the utensils we use are of the utmost importance to achieve a perfect, well-defined cut without any danger to us.

When we buy ham, if it is a whole piece, we must have the basic tools necessary to cut it well and safely for our hands. We are talking about a ham holder, a ham knife and a boning or lace knife. Of course, there are more than just tweezers so that we do not touch the ham with our hands, and protective gloves if we are really new to it. The latter are optional but not essential.

There are different types and by extension different prices. Their price usually ranges from >10 euros to <100 euros. The most important thing is that they are safe and that the ham or ham shoulder is well fixed and does not move, as otherwise poor stability influences the cut and makes it more dangerous for the cutter. IMPORTANT: all ham stands are suitable for cutting a ham shoulder (paleta), but not all of them are suitable for cutting a ham (jamón), as there are different sizes and resistance. It is not the same to hold a ham shoulder, which weighs between 4.5-5 kg, as a ham that can weigh over 9 kg.

So let us be aware of this if we want to buy a ham holder or make sure that the one we have at home will fit the ham we have bought or been given. If it is the case that the piece is too large or heavy for the ham holder we have and we are not going to buy another one, the best thing to do is to have it cut by someone we trust. This way we are sure that the cut will be the right one and we will not hurt ourselves in the attempt. If we didn’t have a spoon handy to take a plate of broth, we would probably drink it from a cup, but we wouldn’t think of using a fork, would we?

Types: there are many but we will highlight the most common ones 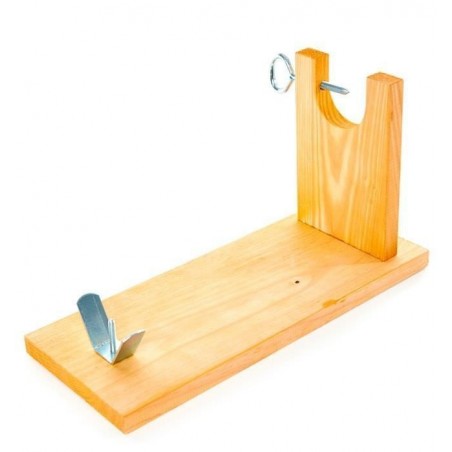 First we will use a deboning knife to remove the rind and yellowish fat and make a V-cut in the lower part of the hoof. In this video you will see what the instruments look like and how one of our master carving master, who in this case is a female ham carving master , starts to cut. Above all, the ham knife is the most important, as it is the one that will determine the cut of each slice. To do this it must be properly sharpened because if it does not cut well, not only can we hurt ourselves by wanting to force too much but the slices will surely be too thick.

How to cut a perfect slice of Jamón

The best slice is the one that our palate welcomes easily, so that we hardly make any effort to chew the slice and it melts in a cascade of aromas and tastes. Obviously, the degree of taste and texture will also depend on the curing

When we talk about curing in gastronomy we are talking about... time of the ham, its quality and whether it is a ham shoulder or a ham. For obvious reasons, the slices of a paleta (ham shoulder), for example, will be smaller than those of a ham (above all in width), and a slice of a well-cut Iberian acorn (bellota

According to the dictionary of the Royal Spanish Academy, th...) ham will melt sooner on our palate than that of an Iberian de cebo. The quality and above all the type of food that is used to make the ham is very important for its taste and texture.

Of course it does! A slice to be perfect and to enter easily in our palate must be thin to favor the sense of every nuance and aroma. If it is too thick, even if it is the best “Bellota” Jamón de Bellota” in the world, the flavour will fade away in the mere act of chewing it. Ideally, when cutting the slice, we should see the knife through, as it slides. The ham knife must slide and be felt under each slice

If you want to know more about ham knives, here you will find more information and ideas. And if you don’t dare to cut, then don’t make any trouble for yourself and bring the piece to us so that we can cut it for you, or ask for it already cut.  It’s up to you! Tipo de servicio
Sliced Jamón
Nombre del proveedor
ENRIQUE TOMÁS S.L.,
C/ Holanda 27,Badalona,Barcelona-08917,
Telephone No.+34 93 383 84 85
Área
Sales Dpt.
Descripción
Cutting a perfect slice of ham might seem easy but it is not. Learn how to do it safely and easily with our usuful tips and recommendations.