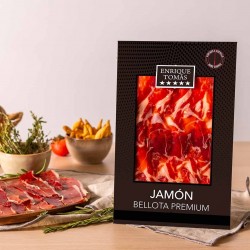 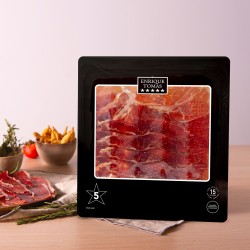 What does 50% Iberian breed ham mean? Contenidos ocultar
1 What is a 50% Iberian ham?
2 Why do we talk about “Pata NegraWhether you know about ham or not, whether you like it or no... ham”?

Iberian hams are all those that are obtained from Iberian pigs

The Iberian pig is an animal of the porcine breed, the name ..., with the ability to infiltrate fat into the muscle, stylized legs and generally black hoof, although this last physical quality does not always have to be given.  But, what does it mean a ham of 50% Iberian breed? In Enrique Tomás we are experts in ham, so who better than us to explain it to you? Let’s go!

In order for a ham or ham shoulder to be of the Iberian breed, it must have been produced with meat from Iberian pigs, but this does not mean that both parents of the pig

The pig is a wonderful animal that is part of the famous Med... from which it is extracted must be of this species. Only one Iberian progenitor is necessary for the descendant pig to be one as well.

Depending on the purity of the breed of the parents, there are three possible scenarios:

It should be noted that the racial percentage of pigs affects the flavour and juiciness of the meat, which has a more intense and succulent taste the higher the Iberian purity. However, there are no hams

Ham is one of the star products of the Spanish gastronomy, a... better than others. Each type of Iberian has its own peculiarities and the fact that it is more expensive does not mean that it is any better, it only means that in order to produce it a greater time of dedication on the part of the breeders and master artisans has been needed. So, if you like the most intense and oily flavours, opt for 100% Iberian while if you prefer the delicate touches, the iberico de cebo ham is the best option for you. Why do we talk about “Pata Negra

Whether you know about ham or not, whether you like it or no... ham”?

I’m sure you’ve referred to Iberian ham as pata negra many times yourself, but why this curious name? Since Iberian ham usually has black hoofs (pata negra), they tend to be called that way, but you don’t have to pay attention to this quality because it doesn’t always happen. There are Iberian pigs that do not have the black hoof and this does not mean that they are not authentic Iberian breed. If you want to know with the naked eye if your ham is Iberian or not, you have to pay attention to the shape of its legs, because the legs of our own peninsula are long and stylized. The colour of the hoof is irrelevant.

Now that you know what it means ham 50% Iberian breed and that, depending on the origin of the parents of the pig from which it is extracted, the meat and the taste of the ham will be more or less intense, take it into account when choosing your ham. And remember, in order to know if  you don’t want to be ripped off,  you don’t have to pay attention to the colour of the hoof, but to the shape of the legs. Look for stylised Iberian hams with a thin reed! or let us advise you through your trusted shop attendant who specialises in ham like ours.

Tipo de servicio
Sliced ham
Nombre del proveedor
ENRIQUE TOMÁS S.L.,
Occitania 45,Badalona,08911-Barcelona,
Telephone No.+34 93 383 84 85
Área
Sales Dpt.
Descripción
Do you know that the racial purity of the pig affects the taste of its meat? Discover what is meant by 50% Iberian breed ham from the hands of the best ham masters!