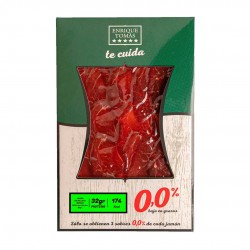 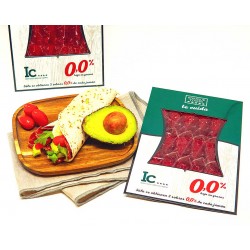 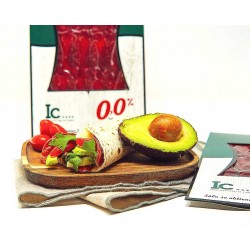 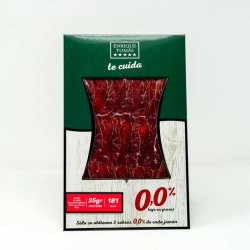 Vacuum-packed sachet with 80 grams of Jamón Ibérico de Cebo de Campo Zero Zero quality. This product has been machine-sliced and prepared by our team of ham carving experts, who have removed all the outer part resulting in pure slices of fatless meat. Now you can eat a delicious diet Jamón with all the quality Enrique Tomás in a comfortable sliced sachet.

The Zero Cero range of products by Enrique Tomás was born with the aim of opening a niche in the healthy world and covering the need to eat healthier and watch the weight, without leaving an exquisite product such as Jamón ibérico off the menu. From now on, in all our stores you will find 80 gram sachets with the best jamón in the world, a high quality jamón completely defatted. The slices of all these sachets have been cut by the master experts of Enrique Tomás, who carefully and using their experience, remove by hand all the external fat from each slice, leaving a product ready to eat with no regrets!

With regard to the famous question of whether or not Jamón fattens, contrary to what most people think, we should make it clear that jamón does not fatten as long as it is eaten in moderation, nor does it fatten bread as long as it is not abused. As with all foods, the bad thing is to abuse it, but as we know that deciding when to stop eating jamón is a difficult matter to control, we now have a Zero Cero range of jamón, light jamón products that you can eat whenever you want without fear of fat increasing the calories in your diet.

Jamón de Cebo de Campo is a new type of Jamón Ibérico that we offer at Enrique Tomás and which, like all our products, has a high quality, an impeccable selection process and a flavour that you will enjoy as never before. Maintaining all the characteristics of the already known jamón ibérico de cebo, the pigs destined to produce Iberian hams and ham shoulders of cebo de campo have gone through a controlled feeding in three phases: feed and cereals, released into the pastureland with wild and natural feeding, and finishing of fattening with feed and cereals again.

You will be able to identify the Iberian products of Cebo de Campo with the characteristic sign of Enrique Tomás plus the green label. The unique flavour of this range of products, previously known as 'recebo' has been renamed 'Cebo de Campo' and the final result is a gastronomic marvel that is unrivalled. 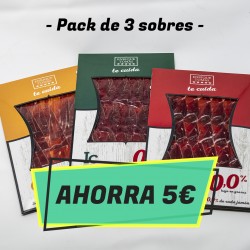 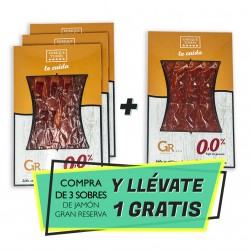 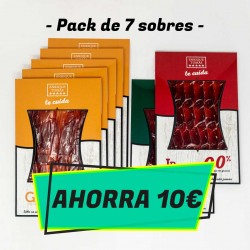