Do you think you already know everything about Spanish Jamón-ham? 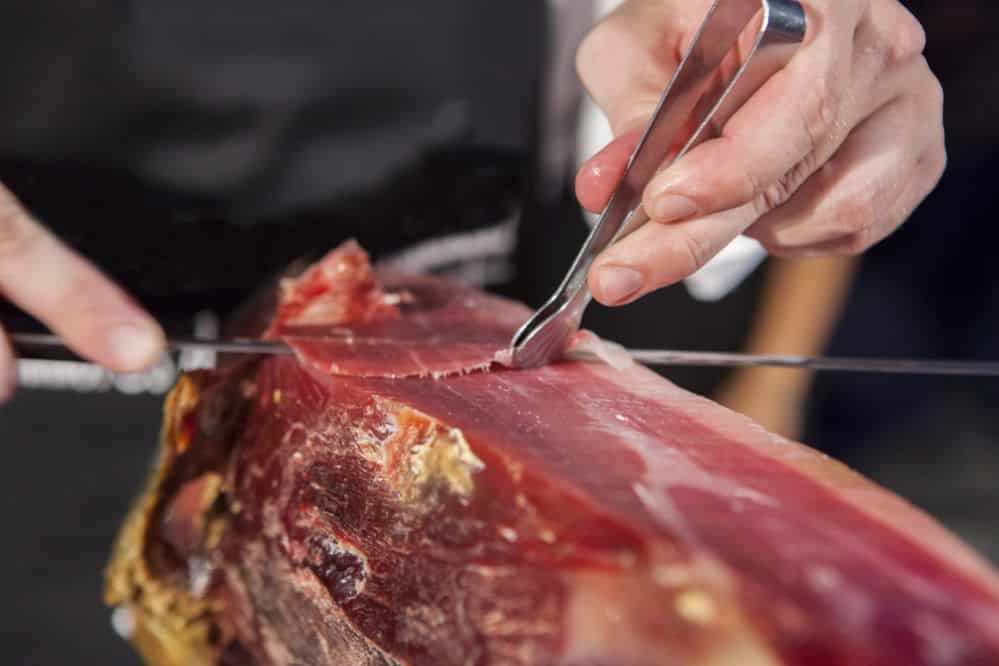 Contenidos ocultar
1 The most outstanding myths about Jamón
1.1 “If it has white dots on it, it’s bad”.
1.2 “Jamón should always be accompanied by red wine”.
1.3 “Jamón de Bellota” (Acorn-fed) comes from pigs that only eat acorns”.
1.4 “You have to cover the Jamón with its own fat”.
1.5 “The most expensive Jamón/ham is always the best”.

There are many false beliefs about Spanish Jamón/ham. Some have been passed down from generation to generation, such as “you have to cover the Jamón with its own fat so that it keeps better” once you have finished slicing, and other topics are more recent because of the result of changes in society’s habits and customs, such as “Jamón is fattening”. If you think you know everything about Spanish Jamón/ham, read on and you will be surprised by the number of myths that have been created over the years.

Since the best way to debunk a myth is knowledge, at Enrique Tomás, the largest Jamón chain in the world, we want to bring you the arguments and true facts about Jamón and its traditions.

The most outstanding myths about Jamón

Here we are going to tell you about the myths that have been created over the years around Spanish Jamón and all its related elements such as slicing, preservation and the best accompaniments.

Those little white dots that sometimes dot the slices give the impression that something is wrong with the Jamón. Yet, in reality they only reveal that it is an excellent piece of Jamón!

The white dots are crystals of tyrosine, one of the 20 amino acids that make up proteins. They appear during maturation and are an unmistakable sign that the ham has been cured correctly. One of the properties of tyrosine is its low solubility, which is why, when the water in the ham tends to be lost, it regroups to form those white crystals that indicate optimum ageing and a top quality jamón.

“Jamón should always be accompanied by red wine”.

Popular tradition has often linked red wine with Spanish Jamón/ham. However, red wine is not the drink that best accompanies the tasting of a good jamón

There is no doubt that red wine can be paired with an infinite number of meat dishes, with cheeses, etc. But it has so much personality and so much presence on the palate that it can overshadow and hide the flavour and nuances of the delicious Jamón.

For this reason, we recommend that if you want to accompany the Jamón with wine, you do so with a glass of white wine, and if it is a sparkling wine even better or a cava for that matter. If red wine is essential for you, try a smooth one that does not invade any of the jamón’s aromas and you can enjoy both pleasures to the maximum.

If you want to know more about pairing to make the flavour of Iberian Jamón even more special, see the following post where we tell you which are the best accompaniments for ham.

If a pig would only feed on acorns, it would get sick and die. Just as any human being would if he ate only one food, whatever it was. Iberian pigs that produce acorn-fed hams start by suckling from their mother during the first weeks of life, then they eat cereal and leguminous feed, grass, roots and aromatic plants and, finally, when it is the time of the “montanera”, they feed mainly on acorns.

During the time they spend in the dehesas, they feed mainly on acorns, which they love, but also on different varieties of plants that they find along the way.

In this case, to find out more, we recommend you consult our post on: “What is the “montanera” or “All about the Iberian pig”.

“You have to cover the Jamón with its own fat”.

In many homes there is still a belief that, after opening and slicing a Jamón, you have to keep a piece of the fat that you have removed to cover the part of the jamón where you just cut it in order to preserve it better. And this is totally false.

Firstly, if the jamón is cut a little each day, it needs to be kept in a place with no draught or direct heat and covered with a lint-free cotton cloth so that the light does not penetrate into the jamón.

Secondly, if you leave it in contact with the cut fat, it becomes greasier and oxidises sooner, which would transfer these undesirable factors to the piece, totally spoiling its flavour as a result. A jamón that has been curing for months, even years, to acquire its special flavour does not deserve to be spoiled at the last moment. It has just the right amount of fat, it does not need more, nor does it need to be in a bad condition.

Discover more tips on “How to preserve Jamón/ham” and become an expert on the subject.

“The most expensive Jamón/ham is always the best”.

As we tend to think in all areas, the most expensive is the best. And most of the time it is not so. The same thing happens in the world of Spanish Jamón/ham, which is why at Enrique Tomás we want to disprove this belief so that you know that jamón is not a matter of price but of taste. Some people like it more cured, others more tender, some more tasty and others less salty.

To know which one is the best for you, if you don’t know them well, the ideal is to try them all and then the one you like the most will be the best. At Enrique Tomás we know that the best jamón is the one that delights your palate when you try it, regardless of price or variety. The important thing is that, whatever it is, you buy the best quality in its range, whether it is a Jamón Gran Reserva or a Jamón de Bellota Iberico Premium

Get to know all the different types of ham and choose the one that is best for you.

For Enrique Tomás, putting Jamón Ibérico in the place it deserves among the world’s gastronomic jewels is practically a duty.

This is the summary of the myths or false beliefs about Jamón. If you are curious to know more and want to find out more about the world of Spanish jamón and its traditions, we recommend the book “Great Lies about Jamón”(Grandes mentiras sobre el Jamón) -Only in Spanish available-, written by Mr. Enrique Tomás, creator of our Jamón shops and a great expert on the product and everything surrounding this tradition.