What is an Iberian pastureland? Find out here! 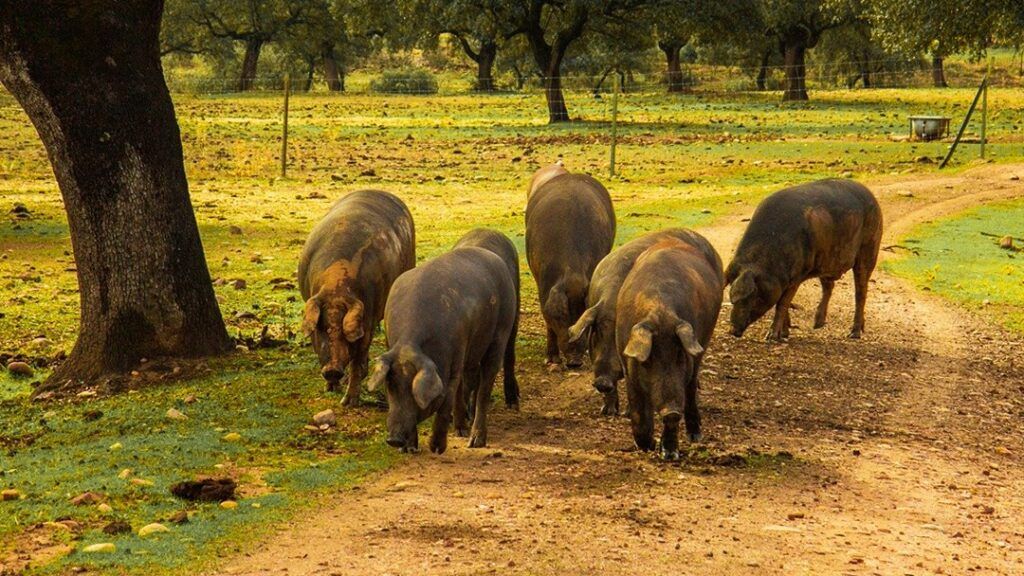 The term Iberian pasturelandThe Iberian Pastureland is a type of ecosystem made up of ho... More has its origin in the Latin word defesa which means “defense or limited land for pasture use” but what is a exactly a Dehesa? In Enrique Tomás we want to share with you all our knowledge about this concept which is directly related to the production of Jamón Iberico de Bellota. Are you ready to go? Get some paper and pen out, we’re starting!

Meaning of the words Iberian Pastureland

According to the Royal Spanish Academy (RAE), the word “dehesa” means: “generally enclosed and wooded land, usually destined for pastures”. In other words, the pastures are very unique mountain areas of great biodiversity where pigs, sheep, goats, suckler cows are fed to obtain meat, bulls or purebred Spanish horses, among other species of animals.

According to data from the Ministry of Agriculture, in Spain the area classified as pasture is between 3.5 and 5 million hectares and are distributed as follows:

According to the same Ministry, in our country there are around 25,000 dehesa farms and around 75% are privately owned, the rest being communal property, groups of neighbours or town halls. As we have already mentioned, pastures are the places where different animal species graze at large and, in addition to making an important contribution to the environment and biodiversity, have a significant weight in the economy of the regions where they are located.

The pastures play a very important role in the production of Bellota Iberian ham, as it is here that the pigs make the Montanera-season, at which time they feed on acorns and other natural products. In order to be brought there, the pastures have to meet certain conditions. For example, a reserve must have at least 100 m2 per pig, if the space is smaller it will be insufficient and the Iberian pigs will not be able to roam or eat at their leisure.

In a good year, the pigs will find as many acorns as they want there and, thanks to this nut, the wild herbs, roots and everything in between, they will eat wonderfully. This diet, together with their own ability to infiltrate fat into the muscle and the exercise they do during the Montanera, is what will make their meat unique.

It should also be noted that the Montanera period has to start at a certain time of the year, specifically in October, and has to last until March at the latest. Why? Because this is the time of year when there are acorns, there is no point in taking them to another time of year.

During these about four months the pigs have to fatten approximately 50% of their weight, i.e. each of them has to reach about 170/180 kg before slaughter. Iberian pigs that do not reach this size after having been in the pasture have to eat fodder again and the meat obtained from them can no longer be called “Bellota Iberico pigs” but is categorised as “Iberico de Cebo

So, what is a pasture and where is its importance? They are essential to obtain authentic Iberian pigs of acorn because thanks to the exercise and diet that they will do therein, they will obtain first class legs. If we have helped you know more things about Iberian Ham’s world…That’s great!